At The Cauldron Co., a New York City bar, customers use wands to fill their glasses, make potions that change color and check their tabs on magic mirrors. It’s all part of the immersive fantasy experience created by co-founders Matthew Cortland and David Duckworth. 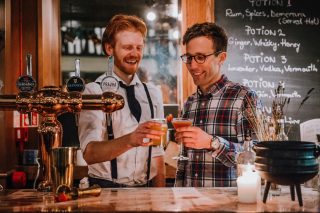 The idea behind the business is “giving people the illusion that magic is real,” Cortland says. The venue draws in patrons with drinks like the Dark Lord Molde Wart, potion-making classes and a wizard-themed high tea. And embracing technology has been key to the business’s success. It integrates payment technology into programmable wands that can be used to add refills to tabs or check tab balances. Another popular feature: a custom reservation system that allows customers to add food and drink orders to bookings.

From the beginning, The Cauldron Co. centered around the concept of programmable wands that store customers’ purchase data as individual bar tabs, which Cortland designed and patented.

“You can open a tab on your magic wand and go to any one of the drink-dispensing taps that exist in the venue. And you can pour drinks,” Cortland says. “It adds that amount to your total tab.” 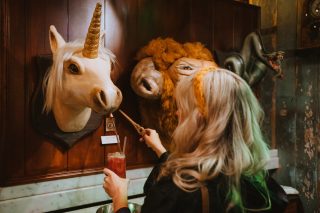 A patron uses a wand to refill her drink. (Photo courtesy of The Cauldron Co.)

After Cortland initially designed the wands, he and Duckworth took the concept further. They hired a team of in-house engineers and designers that spent years developing the technology, according to Cortland. It’s difficult to calculate a return on investment for this technology, he says, because the wands are an integral part of what makes the company a success.

Smart screens disguised as magic mirrors allow customers to check their balances with a wave of their wands. Once a customer is ready to check out, their wand brings up their tab at the counter. For security, wands are associated with a customer’s account rather than a credit card, which is stored separately and charged when a customer checks out.

How it works: The wands currently work as independent devices that connect to Wi-Fi and store data on a cloud server. However, Cortland says the company will soon integrate with NCR’s Aloha point-of-sale system so the wands communicate directly with the POS for a smoother checkout. The mirrors are powered by individually programmed Raspberry Pi computers that pull up a customer’s tab from the server.

As The Cauldron Co. expanded, it also fine-tuned its reservation system, adding an option for customers to order food and drinks in advance. Cortland and Duckworth hired a software engineer to develop their custom booking system.

By incentivizing customers to order beforehand with a 10% discount, Cortland says they’re seeing customers add on drinks that they might not have otherwise purchased at the venue. Despite the time and upfront cost, they’ve seen a payoff, hitting around 175% return on their investment five months after launch.

They plan on developing the feature to allow customers to add on purchases at any time after making a reservation and triggering targeted email campaigns to customers. “The percentage of the people actually availing of the extra add-ons is between 20% and 25%,” Cortland says. He predicts between 5% and 7% revenue growth in 2022 because of this feature.

Cortland also believes that reservation add-ons have increased revenue with in-person sales as well. The venue’s drinks are visually appealing, replicating the magic of the fantasy worlds that inspired them. A drink like the Dragon’s Breath, a flaming strawberry daiquiri, catches customers’ eyes as it’s delivered to tables, leading to in-person upsells.

“When someone orders a round of bubbling shots as a pre-order, you know, you bring that out during the experience at the right time, and everyone else in the room sees that product exists,” Cortland says. “Then you have more people buying that drink.”

How it works: The Cauldron Co. designed its custom booking system with payment processing using the application programming interfaces, or API, on two applications: Stripe, a point-of-sale system, and ResDiary, a restaurant reservation system. Once a customer pays online with Stripe, the POS triggers the database to send the customer’s data to ResDiary, which sends a confirmation email to the customer.

What other businesses can learn from The Cauldron Co.

Technology can be customized to fit a small business

Restaurateurs shouldn’t be afraid to integrate technology, says Mark Wasilefsky, head of Restaurant Franchise Finance Group at TD Bank. Software developer kits, or SDKs, let developers build onto an existing system to create a customized application. When you use them like Cortland and Duckworth did, you can make a smoother payment process for customers. Many POS systems let businesses use SDKs to develop apps that work better for their customers.

For example, Square and QuickBooks both offer SDKs for their products so you can integrate their point-of-sale software into your business’s mobile application. For business owners who aren’t keen on doing the work themselves, hiring a third party to create a custom application is an option.

Letting customers pre-order their dine-in meals, like The Cauldron Co. does, makes it easier to anticipate demand and upsell items online. Small businesses don’t have to know how to develop their own integrations to take advantage of this opportunity. Third-party options like GloriaFood allow customers to make reservations and pre-order their meals in one go. For small businesses that don’t want to offer a full menu, Tock lets customers add on small items like wine pairings with their reservations.

A major part of The Cauldron Co.’s appeal is its immersive fantasy theme that pervades every part of the customer experience and engages people in a story.

“Stories are fundamentally emotional,” says Jorge Barraza, an assistant professor of psychology at the University of Southern California. Building a story around an action, like paying for a drink, “can turn something boring or painful into something that can be less aversive.” It can also make for a memorable experience, increasing word-of-mouth promotion and encouraging repeat customers.

To improve the story you’re telling to customers, consider the customer journey, including decor, menu design and services. Work toward making the experience more seamless and cohesive.

The article Business Inspiration: This Bar Lets You Buy Drinks With Wands originally appeared on NerdWallet.